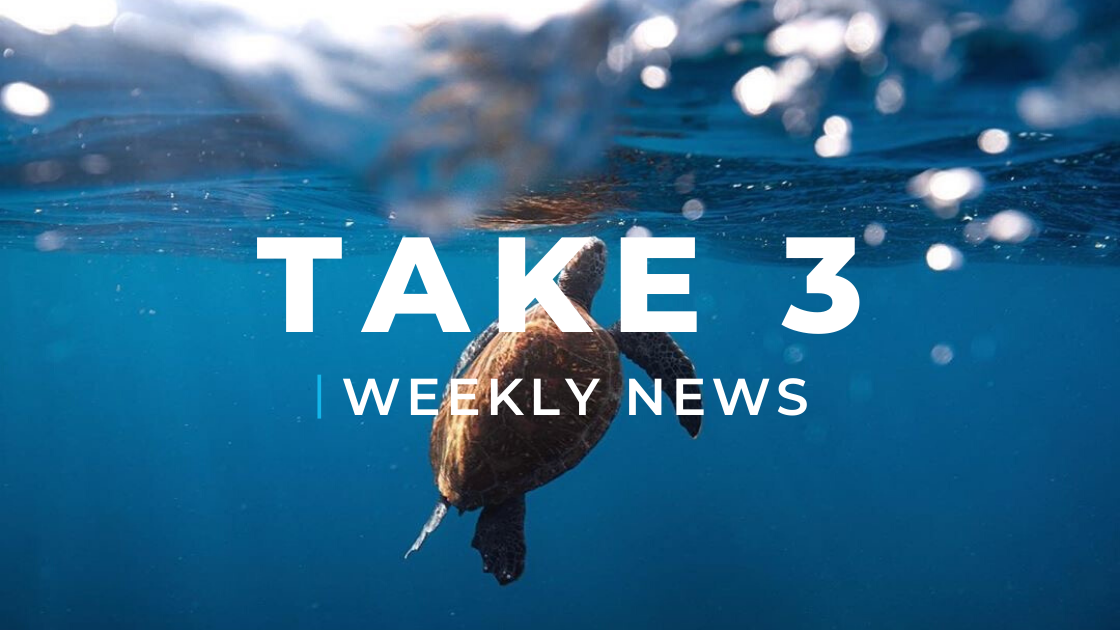 1. TURTLES ARE DRAWN TO THE SMELL OF PLASTIC WASTE, RESEARCH REVEALS

New research has revealed that turtles “mistake the scent of stinky plastic for food,” providing further explanation for the high rates of plastic ingestion and entanglement among the species.

“We found that Loggerhead sea turtles respond to odours from biofouled plastics in the same way they respond to food odorants, suggesting that turtles may be attracted to plastic debris not only by the way it looks, but by the way it smells,” said study author Joseph Pfaller of the University of Florida.

It has been assumed that turtles are drawn to plastics due to its visual resemblance to prey, such as jellyfish, yet the study published in Science Daily revealed that there are other factors at hand.

“It’s not just a visual thing,” said Pfaller to BBC News. “They’re being attracted from probably long distances away to these garbage patches out in the open ocean.”

2. AS CLIMATE CRISIS UNFOLDS, GLOBAL ACTION MUST BE MORE “AMBITIOUS”

The UN State of the Climate report published on 10 March 2020 outlined the ways climate change was presented in 2019. The report is based on data provided by National Meteorological and Hydrological Services and other national and international organisations.

According to the report, CO2 levels have accelerated to the highest point in 3 million years, 40 percent higher than pre-industrial levels. This is due to a combination of steady increase in greenhouse gas emissions and the 2019 wildfires in Australia, Siberia and the Amazon Rainforest.

More than 90% of the carbon released was absorbed by the ocean, accumulating heat and forcing the ocean to record high heat levels. This ocean warming has resulted in sea-level rise, changes in ocean currents, severe marine heatwaves and thinning of floating ice shelves. Furthering this, the absorption of CO2 in the ocean also results in ocean acidification – a change in the chemistry of the water which can have devastating impacts on marine life.

“Ocean warming increases ocean stratification and, together with ocean acidification and deoxygenation, can lead to dramatic changes in ecosystem assemblages and biodiversity, to population extinction, coral bleaching, infectious diseases, changes in behaviour (including reproduction) and redistribution of habitats,” reads the report.

Scientists have discovered that caterpillars can digest and degrade plastic, and are considering this as a potential solution to the plastic pollution crisis.

It was discovered in 2017 that the greater wax moth caterpillar could digest plastic when insects were stored within a plastic bag, only to eat their way out. Since then, researchers at the University of Brandon have found that larval Greater wax moth can survive solely on polyethylene, the plastic that makes single-use shopping bags.

“We found that waxworm caterpillars are endowed with gut microbes that are essential in the plastic biodegradation process,” said study co-author and Brandon University biology chair Christophe LeMoine to CNN. “This process seems reliant on a synergy between the caterpillars and their gut bacteria to accelerate polyethylene degradation.”

While research into solutions to the problem are vital, stopping and stemming the flow of plastic pollution is the ultimate solution to this problem.

Craig Parry PhotographyTURTLES ARE DRAWN TO THE SMELL OF PLASTIC WASTE, RESEARCH REVEALS
Scroll to top