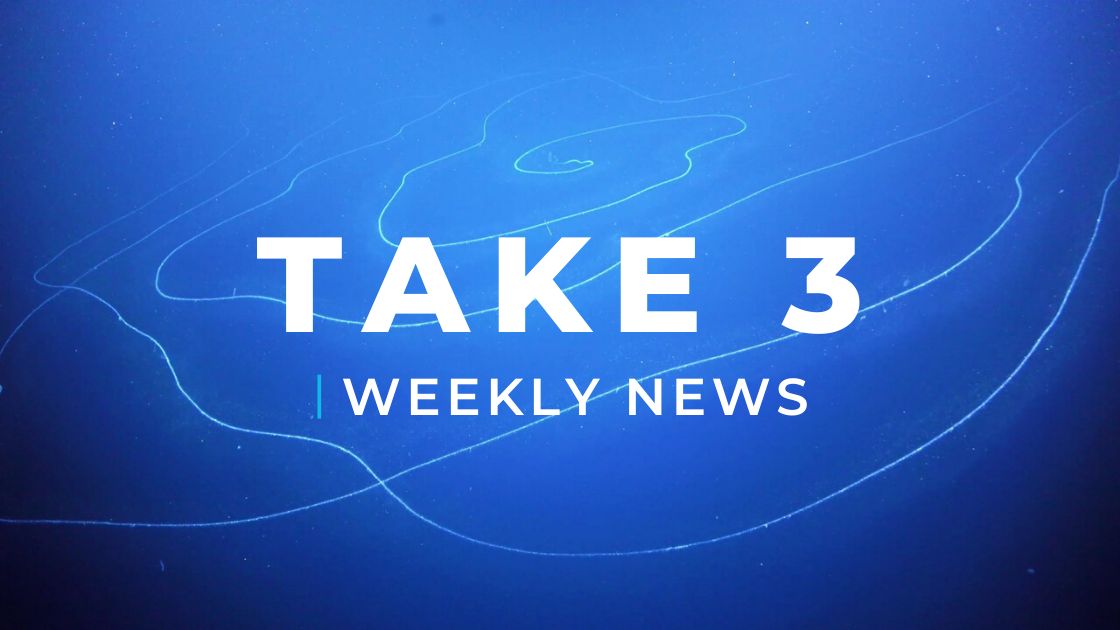 1. WORLD’S LONGEST ANIMAL DISCOVERED OFF THE COAST OFF WA

Estimated to be the length of an 11-story building, the longest animal in the world has been discovered off the coast of Western Australia.

Researchers from the Western Australian Museum have discovered an estimated 150 feet-long (46 metres) siphonophore while aboard a research expedition of deep sea canyons off Western Australia’s Nigaloo coast. A siphonophore is a superorganism consisting of many multicellular individuals that repeatedly clone themselves to meet survival requirements, stringing themselves together to work as a team. An additional 30 new species of marine life were also discovered on the expedition.

The discovery was posted on twitter via the Schmidt Ocean Institute (SOI) who hosted the month-long expedition, and explained that “It seems likely that this specimen is the largest ever recorded”.

“We suspected these deep sea areas would be diverse but we have been blown away by the significance of what we have seen,” said Chief Scientist Dr. Nerida Wilson, according to a statement published by SOI.

“There is so much we don’t know about the deep sea, and there are countless species never before seen,” said co-founder of SOI, Wendy Schmidt, in the statement.

“Our planet is deeply interconnected–what happens in the deep sea impacts life on land–and vice versa. This research is vital to advance our understanding of that connection–and the importance of protecting these fragile ecosystems. The Ningaloo Canyons are just one of many vast underwater wonders we are about to discover that can help us better understand our planet.”

2. EFFORTS TO SAVE THE GREAT BARRIER REEF ARE UNDERWAY

Backed by $150m of funding, scientists have begun to act against the steady destruction of the Great Barrier Reef, which just experienced a third mass bleaching event in less than five years.

The Reef Restoration and Adaption Program (RRAP) published results of a two-year-long study that tried to determine the most practical ways of protecting the reef from ocean temperature rise and the consequent effects. The 43 concepts deemed feasible aim to “promote resilience and facilitate recovery, according to the CSIRO, and include brightening clouds with salt crystals and spraying water droplets into the air to create a heat-reducing fog.

“What we determined is that nothing is being done anywhere in the world at the scale we’re interested in,” said chair of the RRAP Executive Committee, Dr Paul Hardisty, to ABC’s Hack.

“We’re examining and getting into things that have never been done at this scale before.”

Approximately $100m of the funding has been drawn from the previously allocated $443m federal government funding which was administered to the not-for-profit organisation, Great Barrier Reef Fund. The remaining $50m has come from a collaborative effort of the Australian Institute of Marine Science (AIMS), CSIRO, the University of Queensland, QUT, James Cook University, Southern Cross University and the Great Barrier Reef Foundation.

“If we work hard and are smart and are courageous we can turn this around,” said Dr Hardisty to ABC.

“I for one am not willing to throw up my hands and give up.”

3. “CATASTROPHIC” BIODIVERSITY LOSS COULD BEGIN AS EARLY AS 2030

A study by researchers from the University College London’s Centre for Biodiversity & Environment Research has predicted that “a potentially catastrophic loss of global biodiversity is on the horizon” due to the current trajectory of the global climate.

“We found that climate change risks to biodiversity don’t increase gradually. Instead, as the climate warms, within a certain area most species will be able to cope for a while, before crossing a temperature threshold, when a large proportion of the species will suddenly face conditions they’ve never experienced before,” said Dr Alex Pigot, lead author of the study in a press release.

“It’s not a slippery slope, but a series of cliff edges, hitting different areas at different times.”

The study, published in the journal Nature, aimed to predict threats to biodiversity in a long-term forecast, rather than the year-long snapshots which have been provided in the past. The predictions were made using annual projections from 1850 to 2100 of temperature and precipitation across the world, to then estimate the when and where of potentially dangerous climate conditions.

“The historic temperature models, combined with species ranges, showed us the range of conditions that each organism can survive under, as far as we know,” said study author Dr Christopher Trisos.

“Once temperatures in a given area rise to levels that the species have never experienced, we would expect there to be extinctions, but not necessarily – we simply have no evidence of the ability of these species to persist after this point.”

The research found that across the globe at least 15% of organisms will be pushed outside of their comfort zone all within the same decade. This prediction is based off a “high-emissions” scenario, in which global temperatures will rise by 4C by 2100. The recent mass-bleaching events across The Great Barrier reef suggest that the first waves of ecological disruption could already be happening.

“Our findings highlight the urgent need for climate change mitigation, by immediately and drastically reducing emissions, which could help save thousands of species from extinction. Keeping global warming below 2°C effectively ‘flattens the curve’ of how this risk to biodiversity will accumulate over the century, providing more time for species and ecosystems to adapt to the changing climate – whether that’s by finding new habitats, changing their behaviour, or with the help of human-led conservation efforts,” said Dr Pigot.