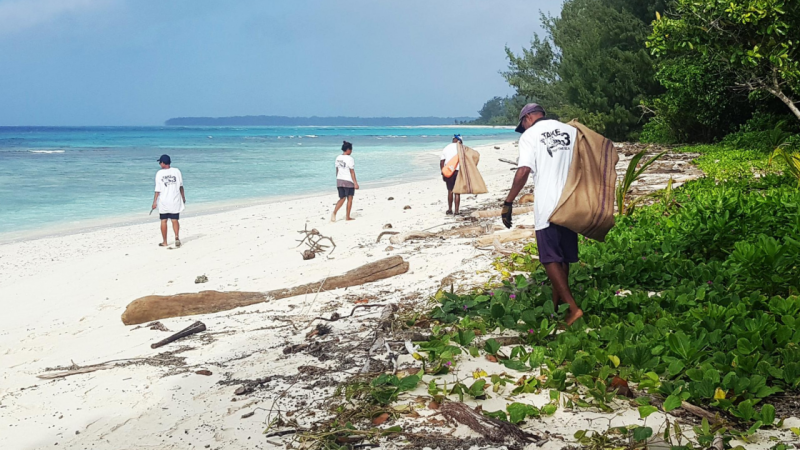 Over the last two months, more than 20,000 pieces of rubbish have been removed from the Conflict Islands thanks to Take 3 and CICI clean-ups, bringing the total weight of pollution removed to 1.4 tonnes since our partnership began.

CICI team conducting a litter audit. At the completion of a Take 3 clean-up event, all collected items are sorted during what we call a ‘litter audit’. Litter audits are an important part of any clean-up, as this is where we capture data around the weight of the rubbish collected and numbers of items collected. Capturing litter audit data is crucial to accurately understanding how much marine debris is being collected around the world.

Below is an excerpt from CICI’s most recent impact report, detailing the conditions on the islands over the last two months.

“The Conflict Island Atoll contains 21 islands, each of which are affected by marine and plastic debris. The amount of pollution that accumulates ashore depends on the wind direction and magnitude, and the tides. During the months of June and July, strong South Easterlies have continued to blow ashore large amounts of plastic, most of it is fragmented and weathered by the strong wave action accompanying these winds. This makes it difficult to pinpoint a point of origin. Plastic water bottles continue to figure heavily in our counts, as well as bottle caps, leaving one wondering where the bottles have ended up.

Since March this year there has been a ban on single use plastic bags in PNG, which may account for a drop in the incidence of plastic bags collected, unfortunately this ban does not cover plastic food packaging. Furthermore, the current alternatives are not much of an improvement; reusable fabric bags that are still made of plastic. These bags may be reused once or twice but ultimately end up being trashed and are now beginning to be washed up on our beaches as well.

Marine litter comprises a wide range of materials such as glass, metal, wood, rubber, and plastics. Plastic waste was already identified as special problem because it persists in the environment. Microplastic is regarded as alarming from an ecologically point of view because it can be taken up by marine organisms, might bioaccumulate in the food chain, or may cause harm to the animal or enhance its contamination level.”

Take 3 is thrilled to be supporting CICI and looks forward to bringing you more updates on the partnership and the impacts of their work.