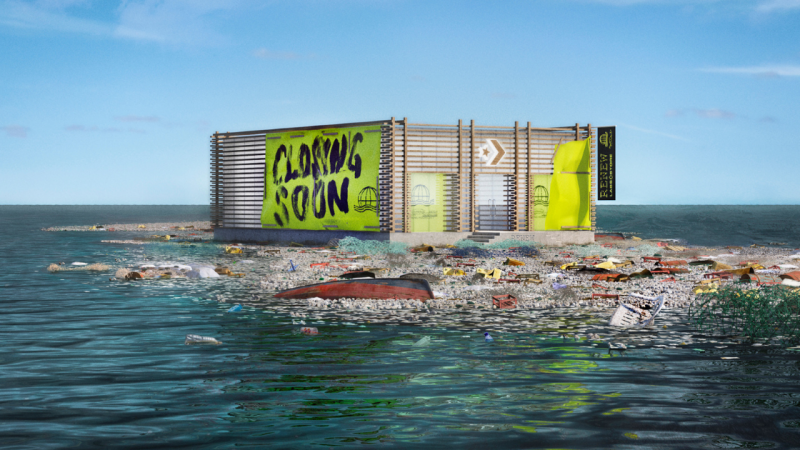 Take 3 for the Sea are proud to partner with Converse All Stars on an exciting campaign to raise awareness of plastic pollution, in particular the Great Pacific Garbage Patch.

The insidious Garbage Patch – located in the Pacific Ocean between Hawaii and California – covers 1.6 MM Square Kilometres and contains an estimated 80 million tons of plastic, doubling in size each decade.

Take 3 for the Sea are delighted to be working with Converse to raise awareness on the issue as well as valuable funds which will enable us to remove one million items of waste from our oceans and waterways.

To do this Converse All Stars, a group of young, eco-conscious artists and activists, decided to take action, and are launching a fully-virtual Renew Labs Store on top of the Garbage Patch, with the aim to close it as soon as possible.

The store’s main purpose is not only to showcase their highly limited collection of sustainable sneaker prototypes, which have been created as part of Renew Labs, a project led by Converse All Stars to fuel sustainable innovation but ultimately, the Renew Labs Store aims to use its proceeds to fund the removal of the Garbage Patch on which it stands – closing it down for good by removing its trash foundation as soon as possible.

Take 3 CEO Sarah Beard said: “This is an important partnership for Take 3 as Converse has the reach to educate and inform a new mass audience about our work and the dangers facing our oceans.

“When Charles Moore discovered the Great Pacific Garbage Patch in 1997, it drew the world’s attention to the plastic pollution crisis and has become a poster child for the cause.

“At Take 3 and for all environmental organisations, it is critical we don’t play down these issues as they are happening all across our beautiful planet and we need to start reversing that trend.

“Working with organisations like Converse, not only allows us to physically take action and remove litter but it also raises awareness of our global movement and can inspire change.”

As so few sustainable prototype units and sizes could be made available for the general public during these early stages of renewable material testing, Converse decided not to put the sneakers up for sale, but rather put them to better use.

That decision led to a model where the prototypes are given away freely to anyone who donates to Take3.org through the virtual Renew Labs store. The store will also feature and sell the Renew Crater, Converse’s most sustainable mass market model. The proceeds from these initiatives will be donated in full to Take 3, with the goal to use that money to help us remove one million pieces of trash. This way, every pair of shoes ‘sold’ takes the store closer to removing its own foundation — and closing it down for good.

Though when the Renew Lab Store closes, it doesn’t mean that the All Stars’ work is over:

“There’s 80 thousand tons of plastic being released into the ocean every year, and globally less than 10% of plastic is recycled. So while closing the store will not mark the end of the problem, we hope that it will raise awareness for all of us, and future generations, to help find sustainable solutions,” says Varsha Yajman, a Climate Justice Advocate and Member of the All Stars.

Click here to visit the store and support our efforts to remove one million items of waste.