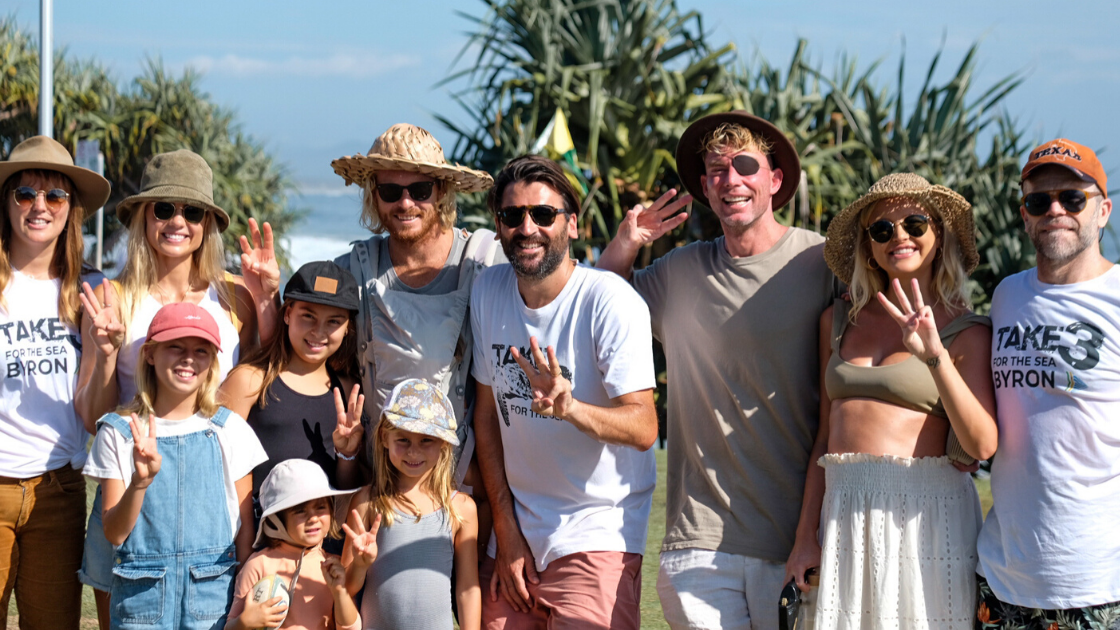 Can you believe Take 3 hadn’t hosted an official clean up in Byron Bay before? We couldn’t either, after all Byron is Australia’s capital of sustainable start-ups and is home to a strong community of ocean activists.

On Saturday 15 February 2020, we made things right and teamed up with Byron Shire Council, Byron Bay Surf Festival, (and Surfer Rosa Communications) and a host of local legends (some you may recognise) for a beach clean-up that prevented 140kg/1,582 pieces of pollution from ending up in the ocean.

The clean-up kicked off at 9am with Take 3 co-founder, Tim Silverwood, paying respects to Aboriginal and Torres Strait Islander peoples past and present. This was Tim’s second last official event as CEO of Take 3, so his address to the 65+ person crowd from 12 countries was a powerful and nostalgic start to the day.

The two weeks preceding the event saw constant heavy rainfall in the Byron Shire with a much publicised 280mm falling in less than 24 hours. We are so grateful for this rain across parts of NSW, but we are also acutely aware of the wash-on effect of stormwater. This area has many drains and waterways whose water flows to the ocean. The water that is transported through these drains and waterways is called stormwater. It comes after rain lands on impervious surfaces like roofs, roads and footpaths, makes it way into drains, creeks and rivers, and eventually flows into bays and the ocean carrying all the pollutants that we humans litter.

“During this clean up we found large amounts of plastic pollution mixed in with natural sticks and pumice debris on the high tide line. No matter how many times we do this, it’s always sad to see human waste mixed in so deeply with nature. Our negative impact on the environment couldn’t be clearer,” said Tim Silverwood at the afterparty at Stone & Wood Brewery

Items that our Take 3 for the Sea Byron community prevented from ending up in the ocean were:

Thank you so much to the people that came together and made this day the wonderful success it was! In particular Byron Shire Council and Byron Bay Surf Festival who continue to do everything they can to keep Byron beautiful. We’re all in this together and it is so empowering to see everyone come together.

Take 3 for Byron is an initiative facilitated by Byron Shire Council in partnership with Take 3.