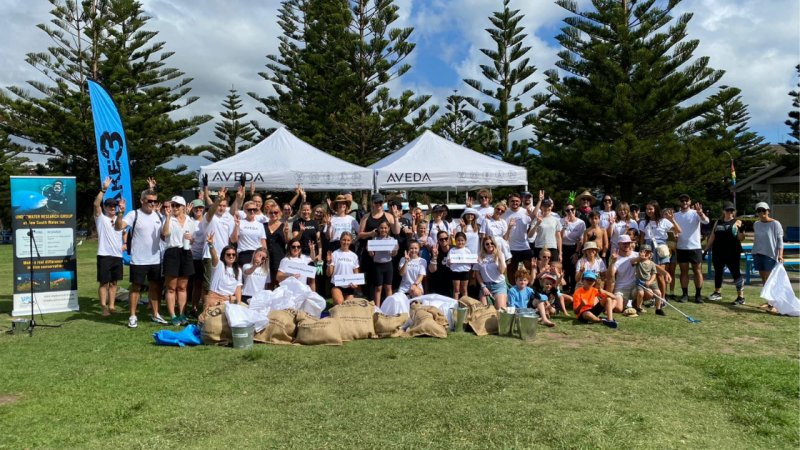 Take 3 and AVEDA were joined by 100s of guests in four different locations on Sunday for a nationwide clean-up as part of our ongoing partnership to clean up our beaches and raise valuable funds to support our ongoing work.

Announced in February, the Take 3 and AVEDA partnership aims to raise awareness and fundraise $100,000 to help Take 3 work with education, social and community groups nationwide to remove 1.5 million pieces of rubbish from our environment.

On Sunday – Clean Up Australia Day – the partnership saw AVEDA teams, salons and guests, including Take 3 ambassadors Kyal and Kara Demmrich and AVEDA partner Jesinta Franklin, descend on beaches in Sydney, Byron Bay, Melbourne and Perth to remove as much rubbish as possible.

Celebrity renovation experts Kyal and Kara were joined by their two children for the clean-up in Sydney with Kyal explaining why it was so important for them to show their support.

He said: “It is good for Take 3 and AVEDA to get everyone together, as in just one hour we have saved so much rubbish from ending up in the ocean.

“We found so many food wrappers, cigarette butts and bottles and to be honest I am blown away how much rubbish we collected in such a short space of time.  It really goes to show that while it may look clean, when you start to look around, we have got a lot of work to do.

“Kara and I are super stoked to be ambassadors for Take 3.  We spend so much time by the ocean, so it is great to feel like we are part of something bigger.

“For us this is especially important as we want to instil in our kids, and the younger generation, that this is their ocean, and it is time that the older generation accept accountability and make a difference.” 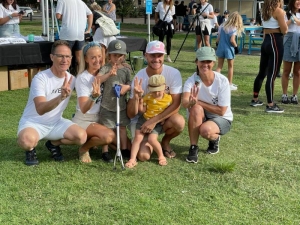 The Sydney event took place at, Coogee Beach, and began with a welcome to country from Aboriginal elder Aunty Maxine Ryan before Take 3 CEO Sarah Beard and AVEDA Brand General Manager Clint Piper took time out to thank the attendees for volunteering and explain the significance of what they were doing.

Joining the guests in Sydney were divers from the Underwater Research Group of NSW. Unfortunately, due to the weather conditions the group were unable to dive, instead focusing their efforts on collecting dangerous microplastics from sea. 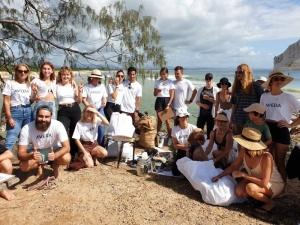 Despite the efforts of all those involved on Sunday, the problem of waste pollution remains and by 2050 there will be more plastic in the ocean than fish and with an estimated 8 million tonnes of plastic entering the ocean every year, raising awareness and forming this partnership is more important than ever.

Our work with AVEDA will continue and the ongoing partnership will help Take 3’s work to stop and solve plastic pollution. The partnership is of huge significance with AVEDA’s mission statement to ‘care for the world we live in’ perfectly aligned with the work of Take 3.

Participants in St. Kilda, Melbourne at the conclusion of the clean up  (Picture courtesy of Callum Needham)

Take 3 CEO Sarah Beard said: “What an incredible day. So much effort and energy has gone in to arranging this, but no one will doubt it has been worthwhile after seeing the amount of litter collected across all four sites.

“As ever the hard work does not stop here, we can be very proud of what we have achieved but the issue of plastic and waste in our oceans and waterways will continue unless we inspire major change. At Take 3 we will continue to work towards that and with the help of organisations like AVEDA we are one step closer.”

Continuing to support Take 3’s mission to protect oceans and reduce plastic pollution, Aveda have also designed a trio of scrunchies made sustainably from post-consumer recycled plastics, 100% RPET that will be available online and at point of sale at Aveda salons nationwide.

Consumers who are passionate about the cause can donate to Take 3 here or show your support by getting in touch via Instagram or Facebook.