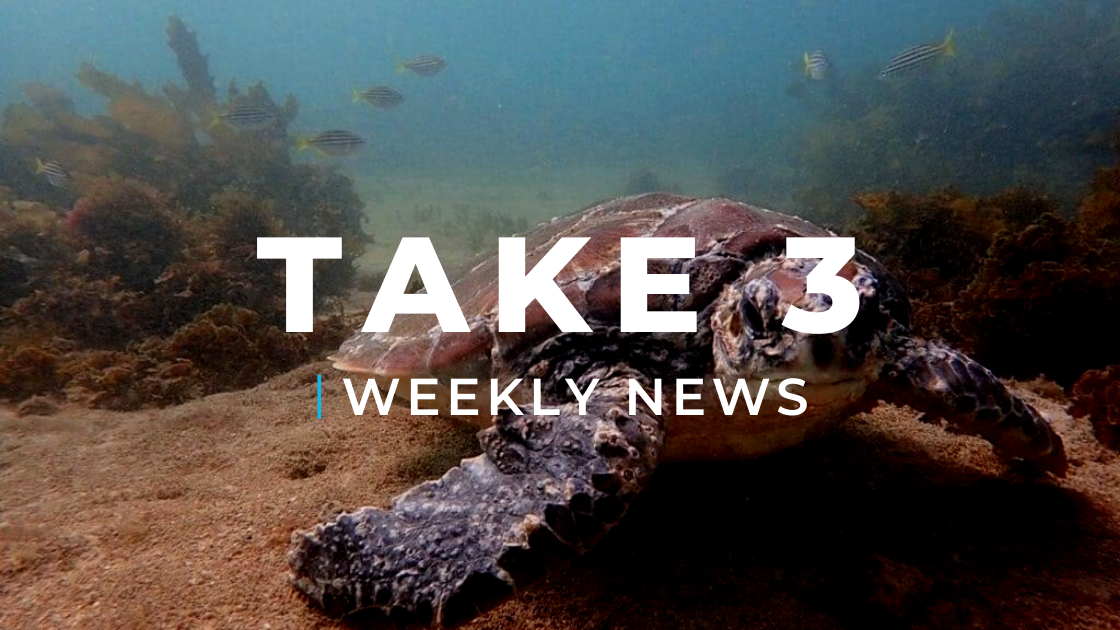 A Green sea turtle in the care of Australian Seabird Rescue Central Coast (ASRCC) has passed a 2.5m balloon string after being rescued off the coast of Manly on 18th April.

A photo of the turtle, lovingly named “Ella”, was posted on a Facebook diving page where volunteers noticed an excessive barnacle load – an indication of sickness or ailment. Volunteers Paul Sharp and Silke Stuckenbrock promptly took to the water at Cabbage Tree Point, Manly, where they rescued Ella.

A week after her rescue, Ella passed a 2.5m balloon and string. A few days later, Ella also excreted a plastic bag. Without the intervention of ASRCC, it is of no question that Ella would have died.

“There are no two ways about it – she would have been dead within a couple of weeks for sure. The pneumonia and the septicaemia would have killed her and she still wouldn’t have had the energy to excrete the balloon, the string, and the plastic bag. It was the oils that we were giving her that helped stimulate her bowel movement,” said Cathy Gilmore in an interview with Take 3.

“I’m just so glad we got her. She can hopefully help make changes for not only her species but all of the marine turtles and seabirds when it comes to releasing balloons.”

Under the current NSW legislation, it is legal to release up to 20 gas-inflated balloons at or about the same time.

“The public needs to understand what releasing balloons does. Nobody would walk to the ocean with a heap of plastic bags and just throw them in the water but that is exactly what they’re doing when they release balloons. It’s no different. It’s deadly litter,” said Cathy.

Fortunately for Ella and her marine friends, the NSW government is currently seeking public input on “the future of plastics in NSW” with the Plastic Plan Survey. This presents NSW residents with the opportunity to have their say on the material which has endangered Ella and killed so much more marine wildlife around the world.

You can find the Plastic Plan Survey here.

A new study by the Queen’s University Belfast has revealed that plastics may affect cognition in animals, with the presence of microplastics impacting hermit crab’s ability to choose optimal shells.

“Usually a so-called ‘normal’ hermit crab will always want to go for the better shell,” said co-author of the study, Dr Gareth Arnott, to The Guardian.

“The striking thing in this study was when [we offered them a better shell], lots of the crabs that had been exposed to the microplastics didn’t make the optimal decision to take [it],” he said.

“This shell selection behaviour is an example of a cognitive process – the animal has to gather information about the shell and it has to then decide how it is going to use that information,” said Arnott to The Guardian.

“We hypothesize that either some aspect of the polyethylene is getting into them to affect their decision making, or else it is an indirect effect that the presence of the plastic in the tank might be influencing their feeding behaviour, for example.

“Based on the striking finding [in this study] this would suggest that there could be a long-term impact in the natural world, but we need to do more work on that,” he said.

Despite reports of the COVID 19 benefitting natural environments around the world, such as a decline in air pollution in New York City, the COVID 19 crisis has resulted in an increased use of single-use plastic in efforts to minimise spread of the virus. The use of gloves, masks, plastic bags and bottles have increased due to safety and cross contamination concerns.

Personal protective equipment, including masks and gloves, is made from plastic. In New York, a growing number of retailers are forbidding the use of reusable bags and are handing out single-use plastic bags instead, according to not-for-profit organisation, Ocean Conservancy. Discarded gloves, wipes and bottles of sanitizer have been found strewn across parks, sidewalks and roads in Kalamata, Greece, according to EcoWatch.

According to Forbes, some members of the plastics industry are calling to reinstate the widespread use of single use plastics to combat the spread of the virus. Whilst the need to prioritize health and safety is essential amid the pandemic, the increased use of plastic should not be dismissed. A study published in the New England Journal of Medicine showed that results from an experiment showed that “SARS-CoV-2 was more stable on plastic and stainless steel than on copper and cardboard, and a viable virus was detected up to 72 hours after application to these surfaces.”

Additionally, the COVID 19 crisis has brought disruption to recycling industries in the US, as Forbes reported.

So, how can we be more sustainable amid a global pandemic?

The World Health Organisation has outlined that regular hand-washing offers more protection against catching COVID-19 than wearing rubber gloves while out in public areas, and the US Centres for Disease Control and Prevention has said that washable cloth face masks offer the necessary amount of protection, as Deutsche Welle reported.